SurCo celebrates our 20th year in business this year!

We’re very proud to have reached this milestone and more so because we have staff and clients that have been with us from the very start.

Things have of course changed dramatically in the last twenty years with regards to the digital world so we have compiled an interesting journey through the evolution of digital so you can see just how far we’ve all come since the grand old days of 1997!

Think of it as a bit of a walk down memory lane if you will.

Walk with us through the… 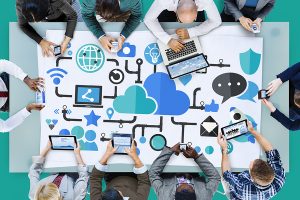 Some people thought that computers would blow up (or even the world!) at the turn of the next century, Y2K anyone? But companies involved in digital knew differently and as soon as the fuss was over, everyone wanted to get online and get seen.

Just two years after we launched, internet advertising was heading towards a $3 billion dollar a year spend, today it is over $580 billion a year and still rising. Mobile is pushing it up year on year. Social media platforms play a huge role in that popularity today.

Considering that mobile phones had only just started to make an appearance in the everyday persons hand back when we launched, digital has come a very long way.

Mobile phones are now the number one place that people view their information online, which is crazy considering that it wasn’t until around 1993 that the general population started to use the internet at all.

One of our favourite mediums for marketing and is still the number one way to market effectively, is email marketing. This channel has been utilised since way back in the late 1970’s and it is still, without a doubt, the very best way to engage your audience and create sales.

HotWired was the very first commercial online magazine that cleverly sold banner advertising on their website, to no less than AT&T. Banner Ads were the biz back in the day and they helped start the ball rolling with online advertising. They are still relevant today but they don’t get the same ROI they once did, mostly because the public have developed what’s known as ‘banner blindness’, people have subconsciously (or consciously!) found a way to remove the ads from their vision, so they aren’t as popular.

We’re talking about HTTP tracking cookies of course. Cookies play a huge role in helping online marketeers and advertisers deliver targeted content to their audience by storing user information on the individuals computer system. This truly came about in 1998 when cookies were implemented into the 2nd version of Internet Explorer. Initially the public had no knowledge cookies even existed but that has changed over time and now (certainly in the EU), websites have to state that they use cookies and seek the users permission to do so.

Around the same time as SurCo started, Yahoo also launched the very first search advertising on their search engine which was the most popular site back in the day, alongside MSN of course.

This prompted people who owned websites that wanted to get noticed to ‘keyword’ their sites so that they would start to show up in those searches, this was the inception of SEO (Search Engine Optimisation) which is when online marketing really came into its own.

SEO is still vital to get seen online and as search engines regularly change their algorithms, it’s important for websites to stay relevant and use clean practices. New, relevant and interesting content is still the best way to do this. SEO tricks once worked but ‘Black Hat’ tactics are now a very foolish thing to do!

Today, we’re not too sure who rules supreme in terms of search engines. We think it begins with G or something like that…

Oh, that’s right, it’s GOOGLE who rules the world. How could we forget!

Google launched a year after us would you believe? They may have been a little late starting but we think they’ve made up for that since, don’t you?

It was in late 2000 that Google launched its first paid advertising service called AdWords, this was the key to their mansion, it revolutionised the digital world of advertising and helped to create the online world we all know today.

In 2002 the good people of Firefox and a few other search engines were kind enough introduce ‘pop-up’ blockers. Pop up adverts still very much exist but thankfully not with same ferocity as they did when they first arrived on the scene in the late 90’s!

It wasn’t until the mid-2000’s when the internet really got going.

Platforms started to come thick and fast around this time with the likes of Facebook and YouTube launching. These platforms were the new game changers and Google saw the potential in YouTube so decided to purchase it in 2006 for $1.65 billion.

Video is currently the most powerful way to get noticed and will be more so in 2018.

Just 1 year later, Facebook wanted a piece of the advertising pie and launched it’s inbuilt advertising platform which now pulls in over $10 billion a year.

IT wasn’t all sunshine and sangria though. The dot com bubble burst for many online businesses during the latter stages of the 90’s and several promising tech startups went down before they had the chance to climb the digital charts.

The birth of social media has taken online advertising from a Hyundai Genesis to a Bugatti Veyron (we just have to get those car references in of course). Social media platforms allow brands into customers every day lives and give them the opportunity to specifically target and tailor their products and services to their audiences needs and wants. Everybody wins!

Social media started out as fun, it then realised how to monetize and capitalize. This is what makes social media marketing so powerful and certainly the online marketing tool of the future.

As for the future of SurCo and the evolution of digital… stay tuned.

Thank you to all of our customers, to our amazing staff (past and present) and to those who follow our newsletter and blog, we appreciate you.